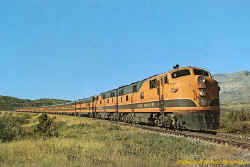 The Great Northern named many of its important passenger trains. Trains were named after routes, cities, people or features along the route. The overview below shows all names known to officially have been used by the Great Northern grouped for clarity in three categories.

Links are provided to a timeline detailing the history of these trains. For quick reference an alphabetical list of links is also provided at the bottom of the page.