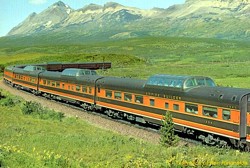 1955 saw the addition of the Great Dome Coaches and Great Dome Lounge Cars to the Empire Builder. Patronage fluctuations between the summer and winter seasons and the continued advance of the automobile, and subsequent decrease of passenger numbers, made for many adjustments to the Empire Builder consist over the years. This page details all these changes by examining all the different consists from the inauguration of the 'Incomparable Great Dome Empire Builder' in the summer of 1955 to the last season it ran under the GN flag in the winter of 1969-1970.

Please use the table below to go to the consist for the year and season given.

a) Seattle - St. Paul Mail Storage Car was not carried on Saturdays & Sundays.

c) Depending on availability an extra 48-Seat Day-Nite Coach or a 46-Seat Great Dome Coach was used.

e) As of September 14, 1958 the 16-4 Sleeping Car was not in the westbound consist leaving Spokane on Saturday nights.