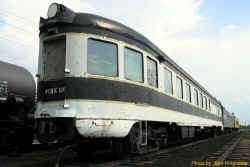 In October 2004 I took a trip to work on GN Observation 'St. Nicholas Mountain'. The trip was fun and although the weather didn't cooperate much I got several things accomplished on the car. I flew into Chicago, about mid-way between the two places St. Nick could be expected to be (Pennsylvania or Iowa), when I booked the flight a couple of months earlier. This also gave me a chance to look around for GN equipment in the area I would travel through. The first day was spent driving to Pennsylvania with a stop at Bellevue, OH to see GN (CB&Q) dome coach 1333, Ranch Car 1243 and sleeper 1384 'Lewis & Clark Pass'.

The next 5 days were spent buying tools and supplies and covering up the hole above the patch in the side of St. Nick, sealing some windows and some smaller holes and cracks. I also inspected the inside and cleaned up the observation end making it halfway presentable again. The observation end still has the rounded booth in it, which it had when at Andy's. I also got the last measurements for registering the car in UMLER (the railroad info file on all cars on the general railway system). The most rewarding part was that I was able to get one of the folding steps working again. Andy's Tukwila Station Restaurant had welded it shut but with some grinding and a crowbar I was 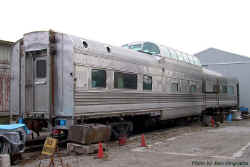 able to get it loose. Although it doesn't operate very smoothly yet it's great that it can be opened again and it's a lot more convenient now to get in and out of the car! I also took some time off to visit GN observation 1195 'Port of Seattle' near Gettysburg, PA which will be moved to the Minnesota Transportation Museum in the future. She sure is in a nice condition. The next two days were spent driving to Iowa stopping off at the Indiana Transportation Museum in Noblesville where GN heater car 13 is located. Sadly enough I got there after nightfall but luck had it that people were still there and more than willing to show me around the museum. 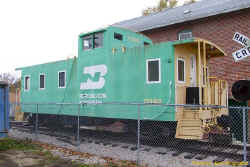 They also showed me one of Henry Flagler's private cars they have in their collection and that car sure is a beauty. Florida East Coast #90 is a steel sheathed wood car with beautifully crafted and still immaculate woodwork inside and with two huge steam locomotive lamps underneath the end platform to light up the track behind the car. Really a great car to see. I also stopped in Illinois to look for three cabooses and found X132 and X300 (the long missing caboose from Snoqualmie, WA!), but discovered that X103 at Macomb is gone. The next day was spent in Northern Iowa to check out the future home of St. Nick. I got a personal tour of the shop and available facilities and checked out the yard and all looks pretty good for St. Nick to go there. 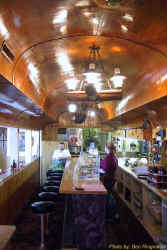 I then continued north to the Twin Cities and stopped at Prague, MN to check out GN RPO 328, followed by a visit to an unknown (but GN) baggage car at the Minnesota State Fair-grounds in St. Paul. A stop at the Como Book Shop in the Bandana Square Shopping Center followed, where I picked up some new books (BNSF Freight Cars by DelGrosso, and Locomotives of the Upper Midwest by Marvin Nielsen) and some magazines including two 1951 trains magazines, one announcing the inauguration of the Mid Century Empire Builder and the other a story about building passenger cars at AC&F including, you guessed it, under-construction photos of a Mountain series observation car! A great find! 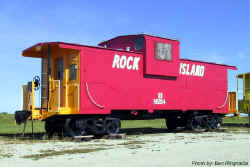 The next day would be my first day of volunteering at MTM's Jackson St. roundhouse. Together with Eric Hopp and other volunteers we worked all day and evening on Northern Pacific (CB&Q) streamlined coach 598. I helped to remove a lot of the old side sheathing which was in bad condition (the NP had used inferior steel in a wreck repair). I learned a lot and had a lot of fun working with a great bunch of volunteers. The next morning I started back towards Chicago. First I ventured south though, to Spring Grove, MN where I found GN caboose X148 among 9 other former BN cabooses most of them 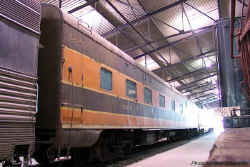 repainted in fresh BN colors and three (among them of course X148) in Rock Island red and yellow (?!). My guess is that they're being readied for sale. I then ventured into Wisconsin and visited the Mid Continent Railway Museum in the hopes that I would see Louis W. Hill's business car (A-22) without its tarp (it had been opened up to the public the weekend before as a start of the upcoming restoration 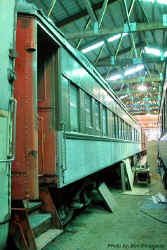 process). Sadly enough she was all covered up again and after taking some nice sunny pictures of GN heater car 6 I left and headed northeast towards Green Bay where I arrived one minute after closing at the National Railroad Museum. I did manage to find someone who was still there and willing to show me the ex GN pieces (GN 1269 'Poplar River' sleeper and A&W 33, a former GN caboose (90008) once sold to, and converted to a bay-window caboose by the Ahnapee & Western). With some difficulty I got photos of both (indoor photographing these large objects remains difficult). I used the evening to venture south to Rockford, IL 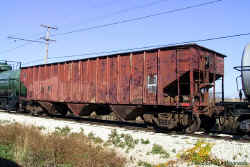 where I spent the night. The next morning I visited the Illinois Railway Museum at Union, IL where I was invited for a private tour by Andy Townsend (thanks Andy!) of the GN objects there. This is a very nice museum. I got a tour through the 'John McLoughlin' a former Empire Builder Pullman 8-1-2 heavyweight sleeper. The inside is still largely intact and the museum is slowly adding some missing fixtures (they have a large quantity of spare Pullman parts they obtained when Pullman shut down). Very interesting to see this car. I'm hoping to see it restored to its past splendor one day. She's a great piece of history! We also looked at former GN hopper 70104 and GN X1390 tank car before it became time to head to O'Hare and catch my flight back home.