As some of you know, I have been busy collecting material for this website during the vacation I wrapped around the July GNRHS convention in Portland, Oregon. In just under three weeks I covered large parts of the GN lines in Washington, Oregon, California, Idaho, Montana and even extreme western North Dakota! Well, let me tell you, there is still a lot to be found wearing Rocky's signature! Enough to keep me busy with updates for months to come. In this 'This Month's Feature' I will try to touch on some of the highlights of my trip. 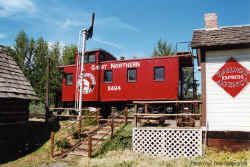 Let's start with cabooses: I found a lot of the 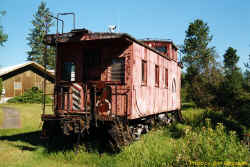 surviving ones listed on this website. Some turned out to have been moved somewhere else, others turned out to be other roads' cabooses, but many were what and where they were supposed to be.

I found beautifully restored cabooses like X494 in Cashmere and X228 in Skykomish, WA, and less good looking cabooses like X702 in Nevada City and X599 in Whitefish, MT.

I saw them all except one! That one gave me a scare, as well as others I mentioned its disappearance to at the convention. I went to see Fred Kepner's 'Railroad Park' and found it to be.... empty!!! The ex Seattle Zoo F-8 1246 that was kept there to be someday restored was gone!

Where did it go; what happened to it; they did not scrap it, did they!?! Well, as they worded it themselves; 'It took two New Yorkers to find her', err; chance upon her ;) (Thanks Alan and Tom). Turns out she was alive and well sitting in Merrill, OR at the SP tracks (of all places) looking better than before. The boiler was back on the frame now making her a better looking engine again, were it not for the 'slight' distraction of a caboose sitting in between the engine and tender! Anyway, with this information in hand Lindsay Korst went out to see her and took pictures of F-8 1246 sitting proudly on track again (thanks for the pix Lindsay). After this hair raising experience it felt good to see P-2 2507, F-8 1147, S-2 2584 and O-1 3059 sitting where they were supposed to be. P-2 2507 is supposed to be moved from Pasco to Wishram, WA, but when I was there, there were no signs of an upcoming move yet.

On to diesel locomotives. Highlight in this department is GN F7A 274B owned by Doyle McCormack which

was sitting at the Brooklyn Yard Roundhouse in Portland during the convention. She was basking in the sun allowing for great photographs, of which I'm sure hundreds were taken by all the convention goers present.  Another great attraction at the roundhouse (GN-only fans please look away now) was Nickel Plate Road Alco #324 putting on it's impression of a steam locomotive! In the roundhouse was also a surprise waiting: one of the two remaining Alco PA's undergoing restoration. Further on in the trip GN NW3 181 was still sitting pretty in Whitefish, while during the entire trip lots of imitation GN (BNSF-pumpkin) locos were seen.

Now here is a department in which I never expected to find so many survivors. A real treasure trove turned out to be the

Big Pasco industrial park where the WSRHS keeps it's collection. Of the 12 passenger cars I saw there, at least half were readily  identifiable as GN, like GN (CB&Q) 1144 'Red Eagle Lake' on which the original GN lettering was still visible underneath the paint, or Amtrak 6802 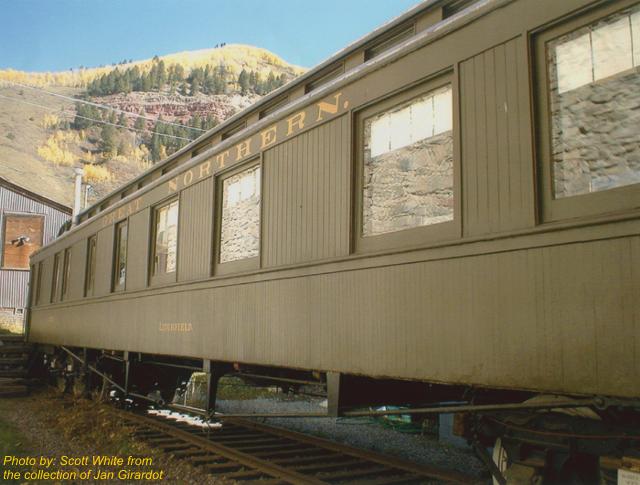 which is GN 1191 'Missouri River', a coach rebuilt in 1967 from one of the 1947 Empire Builder observation cars. In Spokane I took a closer look at observation GN 1196, and on my way to Kevin, MT I ran into a mystery car, an old open platform car that might very well be original GN. Also nice finds were GN 03266 in Vaughn, MT, an old heavyweight RPO last used by the 'System Electr. Crew No. 8 Lines West' as indicated on its sides, and Heater Car #19 (ex F3B 438B) which I found in Wickersham, WA. 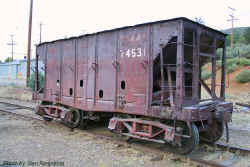 At the Northwest Railway Museum in Snoqualmi, WA I saw in person the GN cars already featured on this site, like Western Fruit Express Reefer WHIX 40325 and two ex GN 50' automobile boxcars.

In Medford, OR and Yreka, CA I saw two examples of the 1924 built GN GSC ore cars, and Park, WA had a surprise waiting for me in the shape of two GN wood boxcars hiding behind fencing and bushes underneath a shelter. Bieber, CA provided a close-up look of one of the GN 2600 series express boxcars still in MOW service for BNSF, while in Sandpoint, ID Rocky was standing proud against a Big Sky Blue backdrop on boxcar 319499.

Although a lot of depots have disappeared, many depots are still around to be admired. Depots big and small, basic or ornate, brick or wood.

Examples I saw on this trip were the grand Portland Union Station (also used by GN). The brick depot in Lewistown, MT, half a depot in Withrow, WA and several 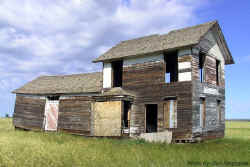 variations of the white standard depot like the abandoned depot in Homestead, MT and the pristine depot in Broadview, MT which was moved away from the tracks and converted into a home.

Not so standard depots were also found. Like the one in Fort Benton, MT, the Hillyard depot now located in east Spokane, WA, and a not so fortunate depot in Box Elder, MT. Among many others also the smallest depot I've seen, the Mission, WA depot at the museum in Cashmere, WA.

were not the only buildings I found. In addition to

the ones that are already listed on this website, some new finds were done.

And then there was the engine house at Shelby, MT, the turntable at Havre, MT and some speeder sheds I found at various places.

The Great Northern built many bridges and a lot of them are still around. A

lot of the larger bridges have often been covered in photographs, but some are still quite unknown. Examples of these are the large wooden trestle at Spring Creek Junction  near Lewistown, MT and the two large steel trestles near Collins, MT.

The Great Northern also built several lift and swing bridges of which the ones north of Everett are the best known. Two lift bridges can also be found though at the Montana-North Dakota border; the Fairview and Snowden lift bridges. Another treasure and still standing is the curved steel trestle at Corbin, MT.

The trouble you run into looking for tunnels is that many of them are out in hiding, like tunnel 3.7 on Marias Pass. Much to the chagrin of my car, I did manage to get to many of them though, but also had to give up trying to reach others. It appears that the Great Northern built many tunnel portals using the same or similar concrete design, at least in the western states.

An example of this design is the tunnel at Wayne, MT. Luckily not all tunnels look the same; tunnels can be found being just a 'hole in a rock' like Tunnel #4 on the Montana Central near Sieben, MT, while others are built up from cut stone like Boulder tunnel near its namesake town in Montana. Famous tunnels can also be seen; like the original Cascade tunnel of which the west portal is readily accessible again as part of the Iron Goat Trail. Less famous but therefore not less unique is the only GN tunnel in North Dakota at Cartwright which, by the way, is completely lined in wood and can be walked through as part of the trail across the Fairview liftbridge.

The above examples are only that; examples of what I have seen on this trip. Many, many more objects were photographed and will be added to this website over the next several months. Lots of other depots, tunnels, bridges and cars are waiting to be added, so keep on watching this place for more! What's that; you want more, now? Oh well, why not! How about this one; a freshly restored and re-engined Red Jammer.